A couple of weeks back, my nephew Nacho celebrated his first birthday at Agave Mexican Cantina at Bonifacio High Street.  I found it a cool concept, so apt for the little celebrant - what better way to celebrate the birthday of a boy named Nacho? (his full name is Ignacio after St. Ignatius of Loyola...and yes, his dad's an Atenean).  Now, Agave is not usually the kind of place one associates with children's parties.  Mojitos and margaritas, and late nights come to mind when I hear Agave... but on early Saturday and Sunday afternoons, the venue works as a novel venue for children's parties. 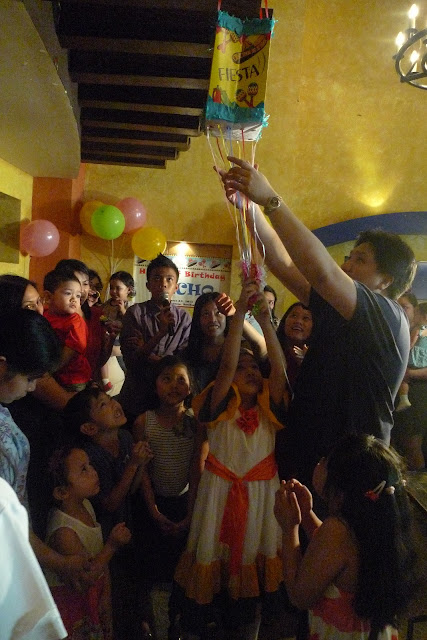 On the menu that afternoon were some Mexican snackables: mini tacos, chicken skewers, calamari, burrito rolls, and of course - in honor of the celebrant's nickname: nachos!!  There was also spaghetti for the kids... and loads of refillable iced tea - which was a blessing in the ultra hot weather.  We had a good supply of sweets, from the mini cupcakes surrounding the festive fondant cake; to the candy prizes and chocolate giveaways - and even the assortment of candies that fell from the fiesta piñata.  My kids were absolutely thrilled with their loot - I'm sure it felt like Halloween for them, with all the treats they got.

There were classic party games, like "Bring Me" with a twist: the items were mentioned in Spanish - so we had to do a bit of translating!  Then the kids got to try pinning the tail on a mule (this game was still in keeping with the Mexican theme).  And there was a cute piñata with the word "Fiesta" written on it - and colorful ribbons hanging beneath it.  My niece, Sophia (Nacho's big sister) was wearing a Mexican dress.  And lying around, was a yellow-fringed Mexican sombrero which my playful dad put on, to the delight of my children.  My son Guijo found the balloons particularly entertaining. He threw balloons at my dad and uncles, and babies alike - from senior citizens to toddlers - everyone was a potential playmate for Guijo.   He and Narra are so much fun to bring to parties nowadays, because they can already enjoy themselves immensely.  They love joining games, and winning prizes, and bringing home loot bags and balloons.


And of course, my kids loved it when it was time to sing Happy Birthday to Nacho.  The fondant cake had fun stuff on it: maraccas, and a cactus, sombrero, and chili, and a colorful Mexican blanket.  And there were mini cupcakes, with cute fondant toppers, perfectly sized for kids and adults-on-a-diet.  As soon as the candle on the cake was blown, the guests swiped most of the cupcakes away... my little Narra included! 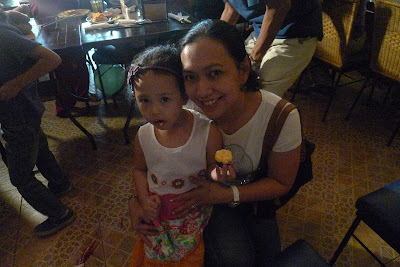 She was one happy party-goer.  Both my kids were still quite on a "high" that even after the party, they still wanted to play some more with their cousins, they ended up just running around to their heart's content at the open spaces of Bonifacio High Street's open-air promenades.  It was a great way to spend a Sunday afternoon. Ole!

Nikki Briones Carsi Cruz
I am Nikki Briones - Carsi Cruz, a thirtysomething-mother-of-two from the Philippines. Since getting married in 2008, and giving birth in 2009, and again in 2011, I found myself pursuing a new passion: my family's nurturance. As I make my way through the world of parenthood, I reflect on how my own parents embarked on the same journey in a different age and how I walk in their footsteps even as I torch my own path and break new ground.